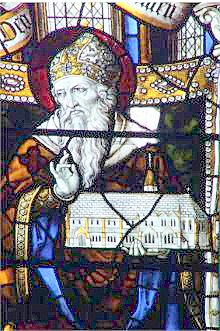 John was born in Antioch about 347, the only son of an officer in the imperial army.

After a period of leading a life of prayer withdrawn from society he was ordained priest in Antioch in 386 and began a special ministry of preaching.The quality of his preaching was to earn him the nickname Chrysostom (Golden Mouthed).

In 398 John was unexpectedly appointed Archbishop of Constantinople. Upon arrival in Constantinople he immediately began a programme of much needed reform.  He became a leading preacher and teacher of his generation. As Archbishop he was a  whole-hearted reformer, frequently  outspoken and wanting in tact. He was encouraged in his work by the deaconess Olympias.

His attempts to change the morals of the church, the city and of the court made him  many enemies, including the rather spiteful Empress Eudoxia.

His enemies worked to devise charges against him and he was condemned,without opportunity to respond, in 403 at the Synod of the Oak.

He was exiled, at first to Curusus in Armenia, but then, as he continued in his forthright preaching he was sent into deeper exile. On route to Pontus he died from exhaustion on September 14th 407 as a result of being forced to travel in appalling weather conditions.

His last words were said to be 'Glory be to God for all things.'

His relics were brought back to Constantinople in about 438, and he was later declared doctor (teacher) of the church.