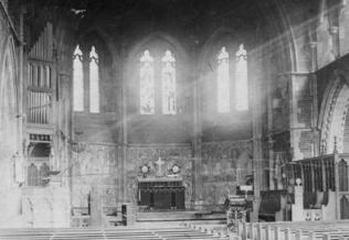 The interior of the Church circa 1904.
Victoria Park, Manchester, was conceived in the 1830s as a private and exclusive housing estate for the wealthy of Manchester.
The original plans of 1836 showed a church, but it was not until 1874 that work began on building the church. The parish was carved from local parishes, especially St James, Birch, and the curate of St James, William Marsden, became the first Vicar of St Chrysostom's. The Anson family were among the original benefactors of the church,
and Archdeacon Anson was, at the time, Vicar of St James, Birch. The family are commemorated in the naming of the Anson Chapel. St Chrysostom's was consecrated
on October 13th 1877 by Bishop Fraser of Manchester.

In 1904 the church suffered a catastrophic fire, which left only a stone shell standing.
For a while the congregation worshipped in a temporary building. John Ely, architect, and member of the congregation, was asked to restore the church. The restoration worked to retain as much as possible of the appearance of the building before the fire.
Consequently much of the interior of the church resembles that of the 1877 building.

St. Chrysostom's remains significant and prominent in the landscape and life of the parish. Through the years the church served the area faithfully, with a succession of dedicated clergy.

Minor alterations have been made to the appearance of the church - including moving the main altar forward and removing some pews to provide a spacious social area. The vestry block was refurbished. In recent years the gardens at the side of the church, in Conyngham Road, have been developed and improved. They include a memorial garden and an indigenous plant garden.

We have a beautiful church building at St Chrysostoms.

The building is in the early English style, and was built to the design of G. T Redmayne, who also designed the College of Art in Cavendish Street, Manchester, and Dalton Hall, next door to St Chrysostoms. After the disastrous fire of 1904 the rebuilding, under the guidance of the architect John Ely, was done to Redmayne's original plans, with only some small variations.

Consequently, what is seen today, both outside and inside is the rebuilt church of 1906 with very little alteration.

Although the area which the church serves has changed considerably since the foundation of St Chrysostom's the church itself has changed very little. It remains significant and prominent in the landscape and life of the area, and it commands a strong and notable position in the Victoria Park Conservation Area.

The building is a Grade II listed building. The entry in Pevsner's Buildings of England reads:

" 1874-7 by G. T. Redmayne...of yellow sandstone. Nave and Chancel treated as one, aisles with lancets, conical tower at the east
corner of the north aisle. West end with a nicely detailed entrance porch with a canopy over containing a statue of St John
Chrysostom. Polygonal apse, five bay arcade of round piers, extended to seven bays on south east side to accommodate the
two-bay Anson chapel. All the furnishings and the roof date from rebuilding by John Ely after a fire in 1904. 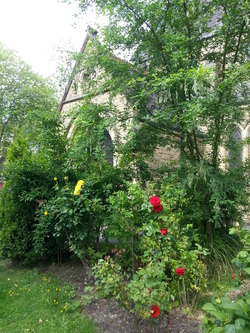 Over the last few years a good deal of work has been done on the grounds of St Chrysostom's Church, to provide a space which not only improves the Church's appearance, but also is an asset to the local area.

In 2004 work began to create two beds for flowers and shrubs. Much of the design, and planning work was done by Dick Hatch, an enthusiastic member of the congregation. In the Summer the Lord Mayor of Manchester officially opened this section of the grounds.

These beds form a pleasant garden area of the grounds and this section is popular for wedding photographs. As well as roses and flowers the beds contain shrubs specifically chosen to attract bees and butterflies. We also planted a small Yew tree which was a cutting from a tree alive at the time of Our Lord.

The following year an area of the grounds was set for plants indigenous to the area (that is those which had grown in the area since the last ice age).